A while back, I posted about some testing we were doing of various software load balancers for WordPress.com.  We chose to use Pound and have been using it past 2-ish years.  We started to run into some issues, however, so we starting looking elsewhere.  Some of these problems were:

So…  A couple weeks ago we finished converting all our load balancers to Nginx.  We have been using Nginx for Gravatar for a few months and have been impressed by its performance, so moving WordPress.com over was the obvious next step.  Here is a graph that shows CPU usage before and after the switch.  Pretty impressive! 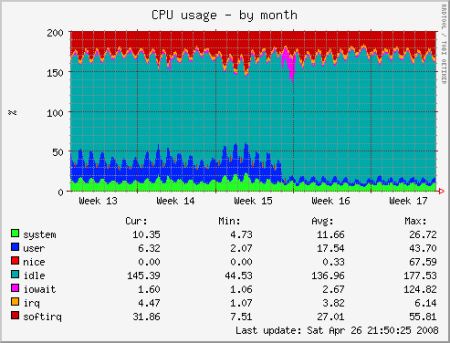 Before choosing nginx, we looked at HAProxy, Perlbal, and LVS. Here are some of the reasons we chose Nginx:

We are currently using Nginx 0.6.29 with the upstream hash module which gives us the static hashing we need to proxy to varnish.  We are regularly serving about 8-9k requests/second  and about 1.2Gbit/sec through a few Nginx instances and have plenty of room to grow!