Evan has a cool post showing some of our internal heat map stats and some interesting points on data visualization.

After a 3 year speaking hiatus from WordCamp SF, I am excited about speaking again this year.  The most interesting part of my talks is usually the Q&A at the end, so this time we decided to get rid of the talk and go straight to the Q&A. It will focus on running large WordPress installations, but I’m sure there will be time to discuss other WordPress-related things. Bring your questions and make them difficult!  If you have a question but won’t be able to attend, please ask in the comments and I will try to answer it during the session (which I think will be recorded).

Howdy – Iliya here again. Seems like I am taking over Barry’s blog. Hopefully this will motivate him to blog more.

On WordPress.com we have over 218 million tables and perform tens of thousands queries per second. To scale all of this, we shard our 24 million blogs across more than 550 MySQL servers. This allows us to cope with load bursts and to handle database servers failures.

For those who are unfamiliar, MySQL data replication is asynchronous and works as follows:

There are a number of things to be considered in this scenario, which can lead to a condition known as replication lag where the slaves have older data then the master:

In order to deal with this, we needed a way to avoid connections to lagged slaves as long as there are slaves that are current. This would allow for the lagged ones to recover faster and avoid returning old data to our users. It also had to be something flexible enough, so we could have different settings for acceptable replication lag per dataset or stop tracking it altogether. Since we use the advanced database class, HyperDB, for all our database connections, it was the obvious place to integrate this.

We implemented it  in the following steps:

A slave is considered lagged when it has a “lag threshold” defined in it’s dataset configuration and the current lag is more than this threshold.

We considered the following options for checking if a slave is lagged.  No MySQL patches are required for any of them:

The third option fit our needs best, however the code is flexible enough to easily support any of these. For caching, we decided to go with memcached, since it works well in our distributed, multi-server, multi-datacenter environment, but other methods (APC cache, shared memory, custom daemon etc.) would work just fine.

HyperDB is free, open-source and easy to integrate in your WordPress installation. You can download it here.  We hope you enjoy this new functionality and please let us know if you have any questions in the comments.

This is a guest post by Iliya Polihronov.  Iliya is the newest member of the global infrastructure, systems, and security team at Automattic and the first ever guest blogger here on barry.wordpress.com.

Hey, my name is Iliya and as a Systems Wrangler at Automattic, I am one of the people handling the server-side issues across the 2000 servers running WordPress.com and other Automattic services.

Last week, within two hours of each other, two of our MogileFS storage servers locked up with the following trace:

The next day, a few more servers crashed with similar traces.

We started searching for a common pattern. All hosts were running Debian kernels ranging from 2.6.32-21 to 2.6.32-24, some of them were in different data centers and had different purposes in our network.

One thing we noticed was that all of the servers crashed after having an uptime of a little more than 200 days. After some research and investigation, we found that the culprit appears to be a quite interesting kernel bug.

As part of the scheduler load balancing algorithm, the kernel searches for the busiest group within a given scheduling domain. In order to do that it has to take into account the average load for all groups. It is calculated in the function find_busiest_group() with:

sds.total_load is the sum of the load on all CPUs in the scheduling domain, based on the run queue tasks and their priority.

SCHED_LOAD_SCALE is a constant used to increase resolution.

sds.total_pwr is the sum of the power of all CPUs in the scheduling domain. This sum ends up being zero and that’s what causing the crash – division by zero.

The “CPU power” is used to take into account how much calculating capabilities a CPU has compared to the other CPUs and the main factors for calculating it are:

1. Whether the CPU is shared, for example by using multithreading.
2. How many real-time tasks the CPU is processing.
3. In newer kernels,  how much time the CPU had spent processing IRQs.

The current suggested fix for this bug is relying on the theory that while taking into account the real-time tasks (#2 above), scale_rt_power() could return negative value, and thus the sum of all CPU powers may end up being zero.

Alternatively, the scheduling load balancing can be turned off, which would effectively skip the related code. This can be done using control groups, however it should be used with caution as it may cause performance issues:

As it is yet not absolutely clear if the suggested fix really fixes the problem, we will try to post updates on any new developments as we observe them.

As you may have heard, on March 3rd and into the 4th, 2011, WordPress.com was targeted by a rather large Distributed Denial of Service Attack. I am part of the systems and infrastructure team at Automattic and it is our team’s responsibility to a) mitigate the attack, b) communicate status updates and details of the attack, and c) figure out how to better protect ourselves in the future.  We are still working on the third part, but I wanted to share some details here.

One of our hosting partners, Peer1, provided us these InMon graphs to help illustrate the timeline. What we saw was not one single attack, but 6 separate attacks beginning at 2:10AM PST on March 3rd. All of these attacks were directed at a single site hosted on WordPress.com’s servers. The first graph shows the size of the attack in bits per second (bandwidth), and the second graph shows packets per second. The different colors represent source IP ranges. 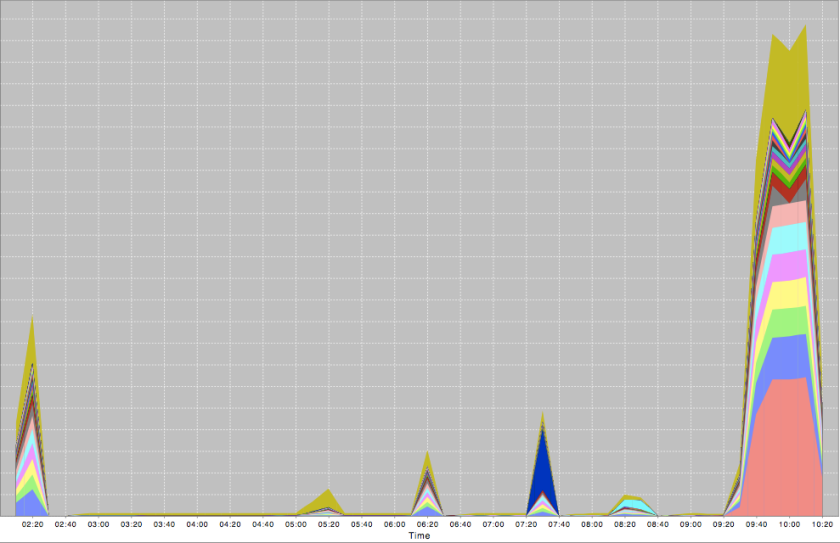 The first 5 attacks caused minimal disruption to our infrastructure because they were smaller in size and shorter in duration. The largest attack began at 9:20AM PST and was mostly blocked by 10:20AM PST. The attacks were TCP floods directed at port 80 of our load balancers. These types of attacks try to fill the network links and overwhelm network routers, switches, and servers  with “junk” packets which prevents legitimate requests from getting through.

The last TCP flood (the largest one on the graph) saturated the links of some of our providers and overwhelmed the core network routers in one of our data centers. In order to block the attack effectively, we had to work directly with our hosting partners and their Tier 1 bandwidth providers to filter the attacks upstream. This process took an hour or two.

Once the last attack was mitigated at around 10:20AM PST, we saw a lull in activity.  On March 4th around 3AM PST, the attackers switched tactics. Rather than a TCP flood, they switched to a HTTP resource consumption attack.  Enlisting a bot-net consisting of thousands of compromised PCs, they made many thousands of simultaneous HTTP requests in an attempt to overwhelm our servers.  The source IPs were completely different than the previous attacks, but mostly still from China.  Fortunately for us, the WordPress.com grid harnesses over 3,600 CPU cores in our web tier alone, so we were able to quickly mitigate this attack and identify the target.

We see denial of service attacks every day on WordPress.com and 99.9% of them have no user impact. This type of attack made it difficult to initially determine the target since the incoming DDoS traffic did not have any identifying information contained in the packets.  WordPress.com hosts over 18 million sites, so finding the needle in the haystack is a challenge. This attack was large, in the 4-6Gbit range, but not the largest we have seen.  For example, in 2008, we experienced a DDoS in the 8Gbit/sec range.

While it is true that some attacks are politically motivated, contrary to our initial suspicions, we have no reason to believe this one was.  We are big proponents of free speech and aim to provide a platform that supports that freedom. We even have dedicated infrastructure for sites under active attack.  Some of these attacks last for months, but this allows us to keep these sites online and not put our other users at risk.

We also don’t put all of our eggs in one basket.  WordPress.com alone has 24 load balancers in 3 different data centers that serve production traffic. These load balancers are deployed across different network segments and different IP ranges.  As a result, some sites were only affected for a couple minutes (when our provider’s core network infrastructure failed) throughout the duration of these attacks.  We are working on ways to improve this segmentation even more.

If you have any questions, feel free to leave them in the comments and I will try to answer them.

I'm currently the Chief Systems Wrangler at Automattic, where I'm responsible for running the globally distributed infrastructure that powers a number of services, including WordPress.com, Jetpack,  WooCommerce, and WordPress.com VIP.